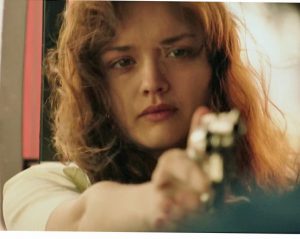 The 45 revolver was huge – and surprisingly heavy. I struggled to hold it steady. When I pulled the trigger, the noise was deafening. I didn’t want to try again, but Laci insisted. He was determined that I learn how to shoot the gun. He was leaving soon for Budapest to see his family, and since I couldn’t go with him, my fiance wanted me to be able to protect myself in our sketchy East Hollywood neighborhood. So there we were, shooting at trees in a remote part of the Angeles National Forest.

Once Laci was satisfied with my progress, we returned to our courtyard bungalow. After dinner, he cleaned the gun slowly, reverently, then wrapped it up and placed it in its usual spot beside the bed. Tired from the day’s outing, we soon fell asleep. During the night, I heard a noise. Someone was in the house. I froze as I spied a silhouette in the bedroom doorway. The man must have seen me too, because by the time I roused Laci and thrust the gun into his hands, the intruder was long gone. It was the first and only time I’ve ever had a break-in.

We were lucky; nothing was taken and we were unharmed. Yet I still felt violated, and could not stay at home while Laci was gone. I spent the entire five weeks sleeping on friends’ couches. And since that time, I’ve never gone near a gun again. I realize that firearms can be useful, and may even be necessary in the uncertain times ahead. But the experience taught me something I’ll never forget: weapons tend to magnetize exactly what they’re supposed to repel. The incident also shook the foundation of our relationship, revealing some deep cracks. It was the beginning of the end for us.

That was the summer of 1979, when we also had a total solar eclipse at the tail end of Leo. If you’re old enough to remember it, consider what happened for you that summer and fall. If the eclipse hit any natal planets, it probably rocked your world, too. It triggered my fourth house Pluto, manifesting as a potentially life-threatening (Pluto) event at my home (fourth house) that brought up underlying issues related to power and control. This is often the way with major eclipses: Energies get activated that play out over the next few years.

On August 21 (11:30 a.m. PDT) we’re due for another total solar eclipse/New Moon at 29 degrees Leo. The last degrees of a sign greatly intensify things; the lion is roaring loudly. This eclipse, being visible throughout the continental U.S., has more impact than its 1979 predecessor. And, the ramifications are even more profound since the eclipse is only visible in the U.S. – the first time that’s happened since 1776, the turbulent year our country was founded. This time, the situation is complicated by trickster (retrograde) Mercury traveling neck-and-neck with combative Mars. Tempers are fraying, and sabers are rattling. Already we’ve seen the horrific incident in Charlottesville and inflammatory threats from Kim Jong-un – as well as our own president, whose prideful Mars-Ascendant in Leo is being triggered by the eclipse.

The intensity of this eclipse period, which began with the Aug. 7 lunar eclipse, continues through early September, when stationary direct (extra powerful) Mercury makes its final conjunction to militant Mars in Leo. Things may reach a crescendo then, especially on the world scene. But even if nothing significant happens for you personally, you may look back (perhaps at the related eclipse period in late Jan. and mid-Feb. 2018) and realize that changes occurring now set big endings or new beginnings in motion. In the meantime, keep a cool head and stay centered. Lots of folks will be over-reacting to events or perceived threats; don’t be one of them. Try to avoid areas experiencing heat waves (be very cautious, those of you traveling to Oregon to see the first landfall of the eclipse!).

As Anna Celestino and I noted in our Live August Cosmic Download, this eclipse period reveals what’s been hidden in our collective and personal shadows. It’s like lancing a wound that’s been festering for far too long. With an eclipse near volatile Mars in Leo, it’s a time of powerful creation, but also destruction. Don’t forget that chaos always precedes new birth. The old guard is trying desperately to stay in control. But it’s too late for them, and on some level they know it. Listen for divine guidance as to how you might help birth the new. There is no turning back from what’s being activated now – but we can help shape and guide it. As for me, at this New Moon eclipse I’m doing a ritual to my ancestors (fourth house) to ask for renewed energy (Pluto) so I can better serve. No firearms necessary!

8 thoughts on “Total Solar Eclipse: No Turning Back”