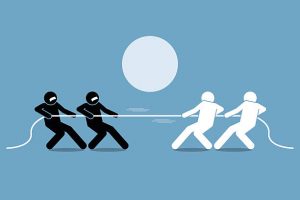 The United States has become a battleground. Like Yankees and Confederates in the Civil War, we find ourselves on opposite sides of the fence, unable or unwilling to bridge the gap. We look on, aghast, at a relative’s righteous Facebook posts, or avoid family gatherings altogether.  Many of us withdraw into our own little cocoons, and find ourselves increasingly isolated.

Some researchers believe that America’s polarized politics – and the partisan viciousness on social media – may be linked to increasing loneliness. Social isolation, they say, makes people less empathetic and more likely to view the world in terms of “us” and “them.” In a recent study of 20,000 Americans, 47 percent reported often feeling alone or left out. And it’s not just the U.S. that’s experiencing a loneliness epidemic. Forty-one percent of Britons say the TV or a pet is their main source of company, and about a half million Japanese spend at least six months of the year at home with no outside contact.

Whether you withdraw from the world or band together against those who think differently, there’s no denying that polarization has reached an apex since the January, 2017 election.  This lightning rod event closely preceded a lunar eclipse in Leo, which ushered in a series of eclipses on the Leo-Aquarius axis that culminates this week. Aquarius symbolizes the collective, and Leo is the individual self.  In an ideal world, these two should be in balance. And the desperate need for greater balance between them has surely been the message of this series of eclipses.

The upcoming total lunar eclipse (Sunday Jan. 20, 9:16 p.m. PST) is also a “blood moon” and “super moon” due to its totality and closeness to the earth. Visible throughout North and South America, most of Europe and western Africa, this huge, rusty red moon will be a sight worth seeing. As the ancients would have reminded us, blood moons (the last one was on Sept. 27, 2015), often coincide with powerful endings and karmic lessons. With a dramatic Leonine flourish, this closing eclipse will bring home the message of the last two years. Look to the area of your chart that contains Leo for clues as to what this might mean for you, or order April Elliott Kent’s fantastic Followed by a Moonshadow report to get the full picture.

This weekend’s eclipse features a square from Venus to Neptune, which can induce idealism and faith, but also foster disillusionment and self-deception. The eclipse also coincides with a square from Mars to Saturn, which happens early Monday morning the 21st but colors this entire weekend. Mars-Saturn is the proverbial rock meeting the hard place. It’s about boundaries and lessons, which sometimes come via encounters with authority figures such as police and governmental officials.

This eclipse also squares rebellious Uranus. Since it coincides with the annual Women’s Marches, we’re sure to see fireworks and hear impassioned voices. When the Moon is eclipsed, issues around the mistreatment of women and families come into the spotlight to be addressed. The karmic nodes, which have recently shifted into late degree Cancer/Capricorn, are in close proximity to this eclipse at zero Leo-Aquarius – and exhort us to let go of harsh, suffocating traditions (South Node in Capricorn) that no longer serve peoples’ true needs (North Node in Cancer). What will happen is anybody’s guess. Let’s hope that we’ll begin to witness and release our collective isolation and alienation, and get past the tug-of-war that’s been keeping us apart.

6 thoughts on “Leo Blood Moon Eclipse: Us vs. Them”