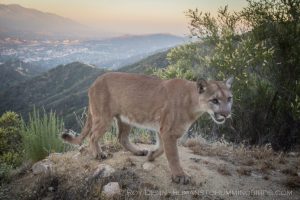 During this intense, scorching hot summer of retrogrades and eclipses, we’ll take our good news where we can find it. Especially if it’s in the form of a handsome newcomer poised to rejuvenate the dwindling mountain lion population of the Santa Monica Mountains!

The strapping young cat, discovered recently via hidden cameras, has been dubbed “Adonis” for his good looks. And just as Adonis pursued Aphrodite in Greek myth, wildlife welfare folks are hoping he’ll find love with Nikita, the dominant female mountain lion in that area who recently lost her mate.

This population faces many challenges. Most male mountain lions don’t live longer than two years, due to inbreeding, ingesting poison, fatal fights with other males and being hit by cars trying to cross busy freeways. And, their previously vast territory has shrunk to only 19 square miles. But fortunately, wildlife welfare coalitions have been purchasing land to prevent it being sold to developers, as well as creating wildlife corridors above freeways. The goal is for lions like Adonis and Nikita (and their offspring) to return to the life that nature intended for them, and to find the love and freedom they deserve.

Love and freedom are worthy goals for all of us at the upcoming New Moon eclipse in Leo, which rules the heart. On Saturday, Aug. 11 (2:58 a.m. PDT) we have the final eclipse of the season, following on the heels of two other eclipses during a time when six planets are retrograde, bringing us back to the past to heal and resolve it. This eclipse, though partial and visible only in the far north, is still apt to coincide with events that evoke outrage and jump-start our hearts into action. This is especially true because it occurs just after Venus squares Saturn – a call to face the sober truth about relationships and justice. Yet the eclipse also happens near a square from Mercury to Jupiter, which is apt to bring more good news.

A solar eclipse in Leo prompts us to lay aside ego-driven goals, find our calling and begin expressing it in the world. It’s a super creative New Moon that’s great for renewal. By the time Mercury and Mars turn direct later this month and Saturn does the same in early Sept., we should have more clarity and be ready to move forward with any new plans the eclipse may trigger.

But meanwhile, those pesky retrogrades may seem to be holding us back. What happens when you can’t move forward? You go within. You soften the armor around your heart and allow yourself to feel. Even when atrocious things are happening. Even when past or present grief threatens to overwhelm you. You dig deep inside to find your connection to your Higher Power. You tap into the kind of love that can move mountains, that can bring a species back from the brink of extinction, that can bring your own heart back to life. That’s the kind of love that this Leo New Moon eclipse wants for you, and for us all.